The ROMEOs were enjoying lunch in a pleasant little Cuban restaurant when one of the diners noticed an old publicity poster on the wall. “Look the guy is sitting in a wicker chair.” – “Artistic liberty. The painter probably had never seen an airplane seat before.” – “Clever advertising psychology. Trying to invoke a feeling of relaxed comfort. Cool Caribbean breezes.” – “Maybe they really had wicker seats on planes.” – The conversation drifted off to another subject – but the question lingered.

On to the Internet!

There were no details, just the size, prize and artist. The second listing linked to Wikipedia – lots of interesting information about the airline – lots of links. This may get us to the answer. But let’s try another search first: “Wicker chairs on aircraft”:

Bingo! Two listings on the first page witch the answer.

Maybe there is more to be learned.

Back to the Wikipedia article – scrolling down there is a listing of the aircraft in Pan Am’s fleet. Indeed both the Ford Trimotor and the Sikorsky S-38 are listed. The link to the Trimotor gets to a long and detailed page.

Scrolling down a bit – and there it is: an interior view labeled: “Cabin interior of 1927 Ford 4-AT C1077, Herrick Collection, Anoka MN.”

Wicker chairs! – the windows don’t look like the one in the poster, so let’s follow the other lead.

The page on the Sikorsky S-38 doesn’t have an interior view, but we learn that Pan Am was a “primary user.” A little deeper searching lead to a really neat site of the Franklin Institute in Philadelphia. The site shows an interactive brochure about the Sikorsky “Amphibion” with an interior picture (shown here) that not only shows wicker chairs but also shows the rear windows having the same shape as in the poster and the cabin roof stringers are similar. 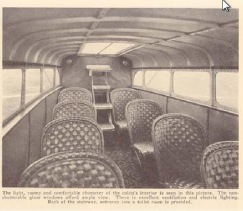 On the same site there is also a Pan Am brochure with flight schedules including this:

So we can be pretty certain we have identified the aircraft depicted in the poster. That leaves just one more question. What about the view out the aircraft window?

Since the poster says Havana, we turn to Virtual Earth. Here is a view of the Havana harbor entrance:

That is pretty much the view as shown in the poster from some eight decades ago.

Be sure to visit “The Franklin” site! And fly to Havana in Virtual Earth!

Lending a helping hand where I can. . . My motto: If it is worth doing, it is worth doing well.
View all posts by Ludwig →
This entry was posted in Searching and tagged aircraft, search web, searching, wicker chairs. Bookmark the permalink.

2 Responses to Wicker Chairs on Aircraft? – Live Search for Answers