It started innocently enough, Facebook showed me one of those frequent reminders of posts from prior years.

This one was for a post from four years ago that linked to my Gallery Ludwig post “Goodbye HMS Bounty”. This gorgeous “tall ship” had succumbed to hurricane Sandy in the Atlantic just a couple days prior on October 28, 2012.

So I shared that sad memory. I wanted to take a look at the post and it came right up.

Back in those days my blog posts sourced images from my OneDrive, called SkyDrive back then.  Microsoft has made many changes but has been good about keeping the old links active. I used to also make the image a link to the same photo in SkyDrive. I clicked and it came up as expected. 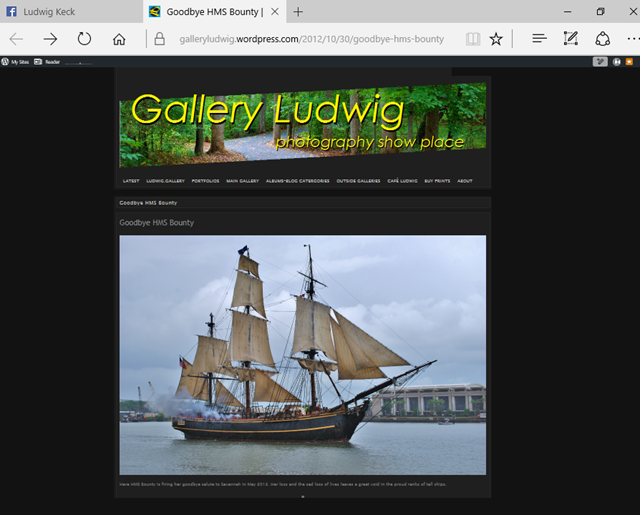 Then I made a stupid decision. I clicked Download. I say stupid decision because my day would have been uneventful had I not clicked the Download link in OneDrive. I got a “no joy”: “This item might not exist or is no longer available”. Really? I was just looking at it! Not only that, I was logged in to my SkyDrive.

Wondering what Microsoft has wrought this time, I went to the blog link in other browsers, Firefox, Opera, Chrome, and behold, none of then showed the photo of the Bounty, not even Internet Explorer, there were no problems when viewed in Edge.

Old blog posts with images sourced from OneDrive show fine in Edge but not in other browsers!

My post that followed this photo of Bounty was a small collection of some of my pictures of the Bounty and its interior. Those were not sourced from OneDrive but used the WordPress Media file. No problems with those. One of the images is a panorama of the interior, stitched together from several shots. The pano links to Zoom.it, another Microsoft neat idea that they gave up on, but the pano still works, or I should say works again. Take a look at Remembering the HMS Bounty.

Fortunately WordPress allows editing of old posts. I added the photo from the WordPress library with a current link back to OneDrive. In Edge I now see the photo duplicated. See what you get: Goodbye HMS Bounty.